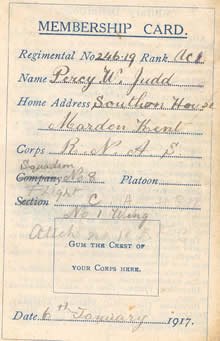 Percy Wilden Judd, Mike and Robin’s father, served in No 8 Squadron R.N.A.S in France and Belgium for the final two and a half years of the 1914-18 War. Percy was involved in the recovery, repair and servicing of the squadron’s aircraft.

He kept a diary which tells us of the hardships he endured. Click on the links to see the page entries for these weeks of the war: