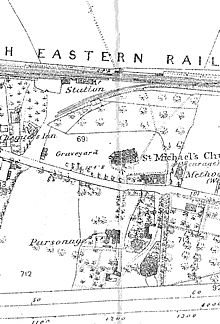 During the Dark Ages, at the time of the original “dens” or clearings in the forest where herdsmen brought their animals to feed, Marden was not “on the map”. However the names of those dens still persist today:

All show Marden as little more than the Church surrounded by woods.

However as time goes on much more detail appears. The pattern of roads begins to look familiar today, and dwellings are shown as well as outlying areas like Marden Beech and Marden Thorn. By the end 18th Century the Military were mapping the country and details of fields began to appear.

Finally a map of 1866  shows the arrival of the railway, the station, and Railway Cottages. However, interestingly, it still shows the turnpikes (TP) at the Maidstone Road and Pattenden Lane. The Church has been supplemented by the Wesleyan Chapel and the Congregational Church (Independent Church) and there is a Parsonage opposite the graveyard, as well as the Vicarage in Maidstone Road. The Post Office was at the corner of  Maidstone Road and the High Street. The circle of the Cockpit can be clearly seen though it is not marked.