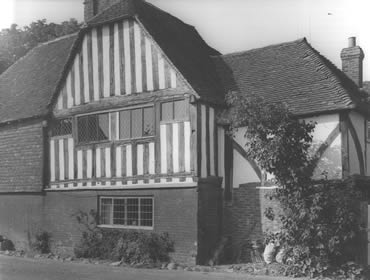 Seen here from the side facing the Unicorn pub, White Lyon House in the High street is reputedly the oldest house in the village.

Together with Bridge House, The Cottage, Turnpike House and Church Green Farmhouse, White Lyon House is a wealden house built in the 1400s during the height of the cloth trade in Marden. Do the long high windows, typical of weavers houses, and the expansive layout of its rooms together with the fact that there is a well in the basement give us clues that this house was involved in the the cloth trade? We know it was formerly (and possibly originally) a public house, then subsequently a house, a school (a Miss Dadswell ran a Dame School there in the early 1900s) and a shop. More recently it was a pair of houses (Worthing House and Fern House). At one point during that time a single lady lived in one and a single gentleman in the other. Rumour has it that the lady cut through a connecting door… 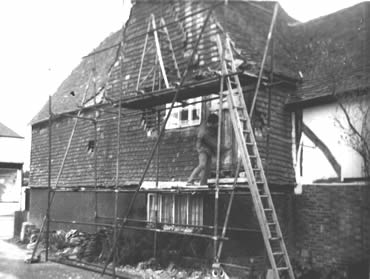 It dates from the 15th century, with additions and alterations throughout the 16th century and in the 19th century. Timber framed with red brick in Flemish bond, it has exposed framing to first floor right gable end. There is decorative red and grey brick to the ground floor of the front wing. It has a plain tile roof and a 15th century open hall of two roughly equal-length open hall bays, with a storeyed bay to each end.

As you can see from the photograph above, at one time the fine timber framing was covered with tiles.