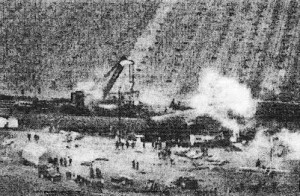 At 8.45 pm on Saturday 4th January 1969, at a point west of Marden Station, near Brook Farm (click on the thumbnail below to see the site on the map) the 8.00 pm passenger express from Charing Cross to Ramsgate, travelling at between 70 and 90 mph in thick fog, ran into the back of the 7.18 pm parcels train from London Bridge to Dover Priory.

The 12 coach passenger train had about 170 passengers on board. The parcels train had been stopped at a signal and was just starting off again when the express ran into it.

The driver of the express and three passengers were killed; eleven people were injured. Visibility on the line was down to 50 yards in places but it had not been thought necessary to operate the fog safety system. 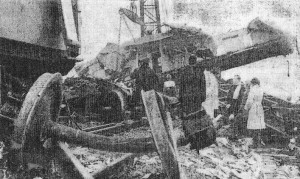 The crane in action

Here in the photograph to the left, we can see a crane being moved into position ready to lower the hulk of a mail wagon after it hung precariously over the twisted remains of railway coaches.

Farmer Mr David Winch of Brook Farm, Marden, and his hard-working team of farm workers (shown left) worked through fog and mud for fourteen hours helping shocked and injured passengers. They assisted the rescue operation by using tractors and trailers to ferry injured passengers across the muddy fields to waiting ambulances. Stanley Skinner, the ambulance officer in charge at the scene, was 59 and living in Bearsted. He received the B.E.M. in recognition of his efforts.

His step-daughter, Ann Woodgate, is a great-great-great granddaughter of Charles Beaufoy who was a grocer and draper in High Street, Marden.