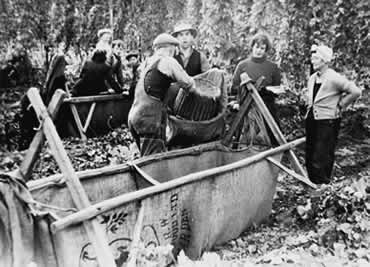 Working in the hop garden

George Flisher, interviewed in 2000, remembers working in the hop gardens in his youth

I had left school when I was fourteen and was looking for a job. Someone had told me a local farmer wanted extra labour for ‘hopping’, or helping with the hop harvest. “We are starting picking next Monday so if you want the job you can start then”.

I arrived at the farm at seven o’clock on the dot, full of excitement at the prospect of starting my first proper job, but also apprehensive as to whether or not I could do it. I need have had no worries; I was taken under the wing of the head wagoner, who proved to be a great tutor as well as a good friend to me. My duties entailed general help with any of the tasks in the hop garden, such as moving the ‘bins’ into which the hops were picked, helping to pull bines which the pickers found too tough to pull, or even cutting them down from the wires above, also I had to distribute the ‘pokes’ to make sure there was one near each bin. Pokes are big hessian sacks about six feet long and four feet wide which hold ten bushels of freshly picked hops with plenty of room to spare, to avoid crushing.

The picking of the hops was performed by both local people and people who came from London, who were provided with accommodation in hoppers’ huts, which were mostly one room with a blanket strung across the middle for the sake of modesty if there were more than two people occupying them. It was generally regarded both as a semi-holiday, particularly for the Londoners, also as a good opportunity to earn enough money to fit the children out with clothes for the winter. The convenient aspect was that the money was usually paid in a lump sum at the end of hop picking, although some pickers would ask for advances before the end. In many cases the older children would help their mothers to pick the hops while the younger ones played in the hop garden during the six week holiday from school. The highlight of their day being when the ‘stop me and buy one man’ came into the hop garden on his three wheeled refrigerated tricycle selling ice cream!

The bins into which the hops were picked were made of hessian fixed to a wooden frame which consisted of two pieces of wood approximately six foot long at either end, crossed almost one foot from the top with a bolt through to allow them to open and shut in a scissor-like movement. There were also two pieces of wood some eight feet long, mortised into the uprights and protruding one foot at either end to form the handles with which to move the bin along the alleys between the ‘hills’ or hop plants as more hop bines were needed. Some of the bins were divided with a piece of hessian sewn into the middle to make two half bins for people who were picking on their own. The ‘V’ at the top of each end of the bin originated from the days when all hops were grown on poles, before being superseded by wire work and the string. The poles complete with hop bines were placed with the end in the ‘Vs’ to facilitate picking, and a man known as a ‘pole puller’ was employed full time to pull the poles from the ground and place them on the bin.

There were set times to start and finish each day, these were defined with shouts of “All to work”, “All to dinner”, and at the end of the day. “Pull no more bines”. This last call was usually called about half an hour before the pickers went home. This was in order to give the ‘measurer’ time to come round to empty the bins.

The pickers picked all day, and the emptying and measuring was performed twice a day by the farmer, once around lunch time and again at the end of the day. He would take the hops out with a bushel basket by laying the basket in the bin and filling it to within three or four inches of the top, sometimes as many as twenty or thirty bushels could be taken out of one bin, according to how many pickers had contributed to the picking; The total number or ‘tally’ would then be recorded on the picker’s card. Some times there were arguments between the farmer and the pickers who would accuse the farmer of filling the basket too full, or if there were too many leaves in the hops he would miss them telling them they had to take them out. He would then come back to them after he had measured all the others.

I recall one incident with one of the London pickers who while her hops were being measured said, “You’re makin’ those a bit ‘eavy aint cha guv”. “They are fair ” he replied, and carried on. After another couple she was still not satisfied and said “They’re still ‘eavy”. And with that, as he bent over the bin for the next bushel, the woman, with both hands pushed his head in the bin! Needless to say the farmer was furious and said “I’m knocking off five bushels!”

While measuring was in progress, as ‘poke’ boy, my job was to hold the poke up for the measurer to tip the hops in. Once full I would tie the top and get another empty poke ready: when all the measuring was completed, I helped the wagoner load all the pokes on the cart, which were then transported to the oast house. I really enjoyed riding on the cart, probably because I was young and felt very important. I also liked going into the oast house after we had unloaded, apart from anything else, the smell of the drying hops was wonderful, there is no other smell like them. It is also said that hops in your pillow will help you sleep, but I have not tested the validity of that story.

Once the hops had been unloaded they were spread evenly over a circular mat made from horse hair, which covered a slatted floor, allowing the heat to permeate through the hop. This floor was situated at the base of the conical part of the roundel of the oast and the capacity was a thousand to fifteen hundred bushels at one time. The man who was responsible for all the work in the oast was called a hop dryer and while drying was in progress he spent all his time in the oast, but sleep was intermittent because he had to keep a watchful eye on the hops at all times. Occasionally having to turn some of the hops, as the heat from the charcoal burning fire situated at the bottom of the kiln was somewhat uneven. The dryer also had to burn brimstone which was placed on the fire in a long handled pan to kill any insects in the hops. The fumes from this together with the moisture from the hops escaped through the cowl at the top of the cone. The whole drying process took approximately twelve hours.

Once dried the hops were raked out of the kiln into the cooling room where the press was also located, this was situated on the first floor of the oast. The dried hops were then pressed into a pocket which was a thick hessian sack some eight feet long, and about two and a half feet in diameter when filled and fully pressed with dried hops. The pocket was suspended through a hole in the floor and secured with a steel ring for the pressing process which, when completed, was sewn with string to seal it. It weighed one and a half hundredweight.

I really enjoyed my time working in the hop gardens, as did most of the pickers, there was always an atmosphere of camaraderie and enjoyment among all the people who worked in them even though there was a war on at the time. Sadly hop growing has declined dramatically over the last two or thee decades; and the methods of picking and drying have changed. Now the bines are cut down and carted by tractor and trailer, and driven directly to the oast building where they are picked by machine.

The modern method of course is not so labour intensive, with just a small number of people fetching the hops from the garden, while others work on the machine picking out leaves. Powerful oil burners are used for drying these days also, because they generate much more heat, the quantity of hops dried in each kiln is much greater than in the days of charcoal fires. But the smell of drying hops still fills me with nostalgia.