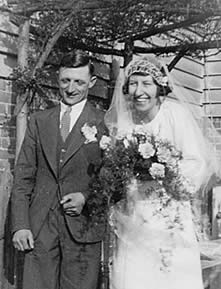 We have indexed 3,787 marriages that were registered at St Michael & All Angels Church between 1561 and 1950, and these are available to search in our Archives.

Inspired by June A. Fancett of Victoria, Australia and her work over many years in transcribing the original documents from microfiche, we have taken this forward by indexing these transcriptions and others for the Internet. We thank Gill Tarry and Cathy Goodwin for their work on this project.

The records show some interesting statistics. As we might expect, the great majority of marriages were of local people, particularly the brides. If they were not from Marden, then from nearby villages and towns including London. The most distant bride came from Stafford. However, some of the grooms came from further afield: Yorkshire, Scotland, Ireland, even as far as Alberta in Canada and one gave his address as HMS Vendetta. While the majority of people were single before marriage, 280 widows were remarried and 132 widowers.The optimum age at marriage was 21 for women and 23 for men. Our youngest bride was 15 and the oldest 69. The youngest groom was 17 and the oldest 71. However not all weddings resulted in a marriage as can be seen from this entry in the register:

“This marriage was not solemnized because Henry SEERS the father of Mary SEERS forbade it, stating upon his oath that his daughter was under age and came to the church at Marden this day June 13th 1847 signed J Deeds vicar of Marden”.

The path of true love never did run smooth!

In 1753 the legal age for marriage was 14 for boys and 12 for girls and this law didn’t change in England until 1929 when it was raised to 16 for both sexes with parents’ consent and 21 years without consent. In 1969 you could marry at 16 with consent and 18 without.

Search the archives for your ancestors…

If you would like to know more about marriage ceremonies in the past, follow this link to England and Wales Marriage Certificate Information.