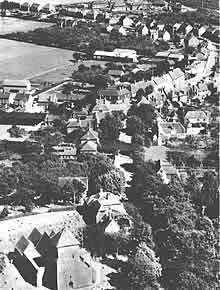 The centre of the village has a cluster of old buildings, one of the most ancient being White Lyon House, dating from the 15th century. At one time a pub, with the adjacent 17th century Unicorn Pub, this formed the entrance (the Lyon and the Unicorn) to the old market, now Tomkinson’s Yard. On the other side of the Maidstone Road, Turnpike House is of a similar age to White Lyon House.

A short distance away, the Court House, now the Farm Shop, has always played a prominent role in Marden, whether as a centre of law keeping or as a business.

The modern estate of the same name stands on the site of Chantry Place, a large house which stood opposite the Church.

Rose and Crown Cottages, Vine Cottage and Yeoman Cottage in Howlands Road all date from the 16th century. While Railway Cottages on the south side of the railway line off Maidstone Road were built in 1840 for railway workers. Beside the station stands the Old Station House of a design typical of South Eastern Railways architecture of the 1840’s.

The Hoppers Hospital, which stood where the present Medical Centre now stands, came about to cater for Marden’s annual visitors during the the height of hop-growing. In harsher times the Pest House stood at Beech Farm at Marden Beech. It was used by stricken parishioners during the Great Plague. This was eventually converted into two cottages, which were pulled down as recently as 1912. Two modern cottages, known as Cedar Cottages, now occupy the site.

Another reminder of the privations of the past was the Workhouse, or Poor House as it was also called, which stood on the site of the Allens in Albion Road. Nearby Jewell House and Bishop House have early 18th century frontages but much earlier interiors.

Outside the village Great Cheveney and Stilebridge Farmhouse have interesting histories and the Water Mill near the end of Pattenden Lane played an important role in the area during the 19th century.

Illustrated by local artists, our new publication “Marden and its Artists” explores the buildings and landmarks of Marden in detail. This is available through the Publications page.