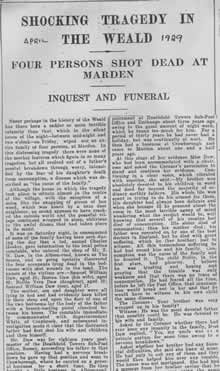 “Never perhaps in the history of the the Weald has there been a sadder or more terrible calamity than that, which in the silent hours of the night – between midnight and 2 o’clock – on Friday, wiped out an entire family of four persons at Marden”

So began the newspaper article describing how a family of four died in tragic circumstances early one morning in April 1929. Mr Samuel Daw, suffering a mental breakdown brought about by fearing that his daughter was dying from tuberculosis and worried that his grocery business was failing, shot and killed his son Samuel William (Roy) age 17, his daughter Nellie 18, and his wife Rosina, while they slept before turning the gun on himself. Formerly a sub-postmaster at Heathfield Tower, Sussex, Mr Daw had moved his family to the shop in Albion Road 18 months previously. Little was known about the family who made few friends and kept themselves to themselves. Though the shop was in the middle of the village,

“with the exception of a noise like the snapping of pieces of box wood, which was heard by a next door neighbour, no sound appears to have reached the outside world and the peaceful village continued wrapped in sleep, oblivious to the awful drama that had taken place in its midst.”

The bodies were found about 8pm on Saturday. Charles Hooker, a 17 year old under gardener at Little Hickmotts, was best friends with ‘Roy’ Daw, and had gone to the shop after he had not seen Roy at the afternoon football match. The door was closed but not locked, he knocked and shouted but could get no reply. After looking in the street and shouting again with no reply he reported the matter to the police. PC’s Conway and Nye discovered the bodies.

The inquest was conducted by Major Eric Clarke, the Cranbrook coroner, in the billiard room of the Working Men’s Club on the Monday afternoon. Verdicts of murder and suicide were returned. A Mr Payne was foreman of the jury. Evidence was heard from the police constables, two doctors and Mr Daw’s sister who described in a voice vibrating with emotion how her brother had been utterly devoted to his family, and was in “the most terrible agony of mind” dreading that his daughter would die of consumption (tuberculosis), as he had lost several cousins, his other sister, mother and father to this terrible disease.

The coroner said that he did not think that it was necessary for the jury to retire to consider their verdict and the jury, without hesitation, unamimously returned a verdict that the mother, son and daughter were murdered by the father, Samuel William Daw, and that he committed suicide whilst of unsound mind.

The funeral was held on Wednesday afternoon. The cortege of four coffins on two biers passed solemnly from Albion Road to the parish church where the service was conducted by the Reverend J A Finch. The family were all buried in the same grave in the village churchyard.