When we installed our Heritage Centre in our local library, in November 2007, we were aware that a World War II siren post, located behind The Unicorn pub was about to be excavated to make way for house building. This prompted us for some reason, to recognise that the village no longer had red telephone boxes.

My colleague, Colin Whittle, set out to search for both a siren and a red telephone box.

Eventually he found an unwanted, disconnected box in Benenden, a nearby parish. Their Parish Council were happy for us to have it.

It was excavated by another of our volunteers, Trevor Simmons and his son Duncan. It was transported to Little Mill Farm by Homeleigh, a builders merchants, for storage.

It was then again transported by Tomkinson’s men to the library and Heritage Centre site, which had been prepared by our local firemen in their free time, to join the World War II siren and post erected by the firemen and Homeleigh in time for Remembrance Day, Sunday 9 November 2014.

All the above was completed without charge and with the goodwill of all concerned.

The full story is told with illustrations in our latest booklet “The World War II siren and the K6 Red Telephone Box” costing £5. Its sales will help to offset the other costs of more than £2000 required to set up the site adjacent to the library and Heritage Centre. 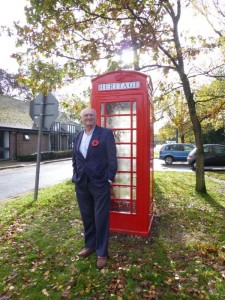