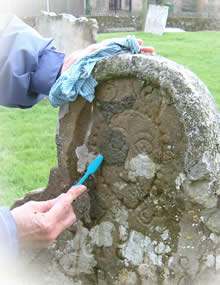 Much of the work we are doing concerns documenting the lives of the past inhabitants of the village.

Continuing work is cataloguing led by Chris Turner, Sian Burr with input from Chris Gosling and others. Images are constantly uploaded to the web catalogue by Alan Baum and Colin Coomber. Topography. The layered map by Kevin White is nearly finished.
Most exciting is the prospect of a new DVD, which involves some young film-makers.
Tithe information from 1841 needs to be revisited as Martin Roberts had to stop this to build an extension and the Trades Directories are nearly complete (Sue Turner & Penny Day)

Work is taking place on a layered map which will outline the growth of the village over time. We are conducting a photographic survey of the village to record the way the village looks today. In conjunction with the survey, a major objective of the group is to identify potential destruction of sites and artefacts of historical interest, and to prevent their loss.

Preserving the heritage of the village

An important role for the History Group is to preserve village documents from both the past and the present so that they will be available for future generations. All the Maidstone Journal extracts have been copied by Catherine Alderson, referenced by various helpers and are being uploaded by Patricia Maynard.  Next we hope to give the other local newspaper extracts the same treatment.

Marden Heritage Centre opened in November 2007 having completed a refurbishment of a quarter of Marden Library within the budget granted by Awards for All. We gave ourselves a four month learning curve period before our official opening in April 2008.

We are open seventeen hours a week, the same hours as the library, with volunteers running the centre ideally two people per two hour shift. We have various life skills which we use for the benefit of the Centre and its visitors. Our visitors number 80/90 people a month. Some come:

Working in the Community

Marden is a three generation village with many people who have lived here their entire lives. Others go and then return. It is a rural community based on fruit and hopping and has witnessed many changes in agriculture. An active supporting population lived long lives and our records show grocers, butchers, bakers, a fire service and a medical service which has supported the farmers and their labourers as well as the visiting hoppers and apple pickers during the season. An industrial estate, newer housing and an influx of commuters has helped the village to remain vibrant and the Heritage Centre has provided a sense of community and belonging which we did not anticipate.

Our archive, cataloguing and research teams are extra volunteers working from the Heritage Centre and home. We have done presentations to many history groups to encourage them with their records and research and each year the Year 6 class from the Marden Primary School have come to spend a morning to work on a project with us using our resources.

Our special event when we held a Descendants Day demonstrated the common heritage that the community in Marden share.

Several new books have been published this year. Please refer to the Publications page.