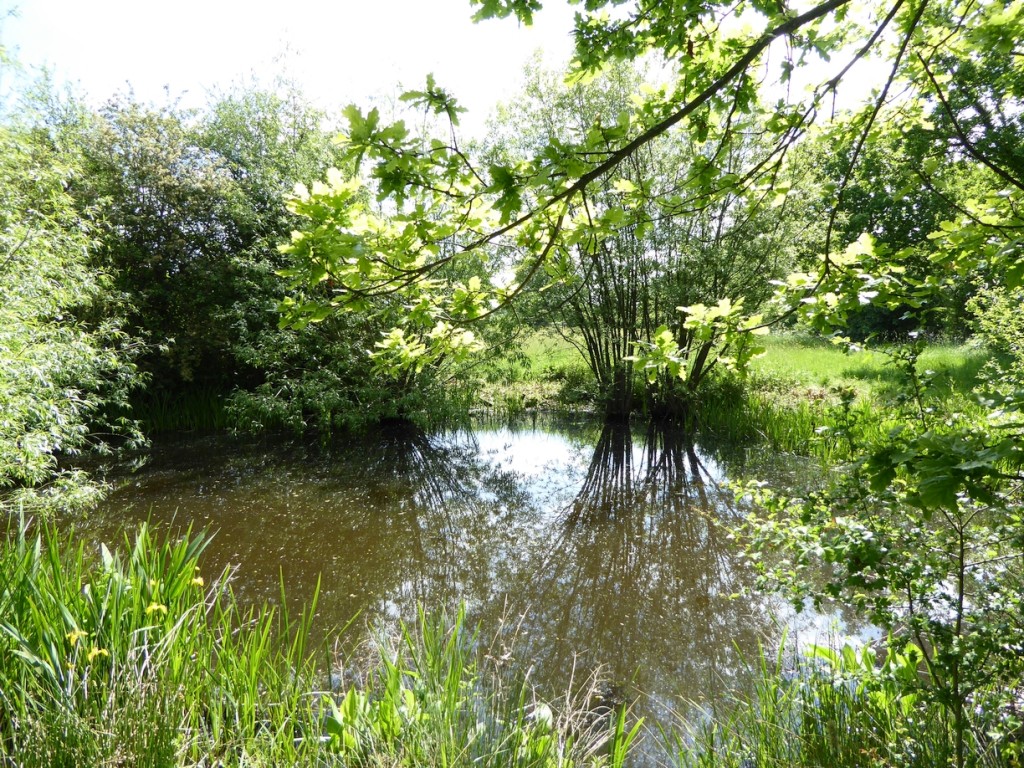 A pond at Marden Meadow with the Chequer tree at right

It’s mid-May, a lovely morning, what better thing is there than to walk to Marden Meadow with my daughter. The footpath goes through Stonepit Farm (signs not always there), across Park Road and along the Marden Road to Staplehurst and then you clamber over the wonky stile into the Meadow. On the way, we passed a stallion and foal, a group of curious, newly-shorn sheep and a pond of noisy frogs. On arrival, my daughter observed that there were a lot of people there – four !! We wandered around an amazing variety of colours in the green – winged orchids for which this site is famous. Abundance was there in all the colours of the rainbow – yellow rattle, glowing meadow buttercups, red clover, vetch, bird’s foot trefoil, meadow saxifrage, bugle and ox-eye daisies, to name but a few; plus a variety of wonderful grasses. The pond was edged with yellow flag irises and bulrushes. Yet there were two disappointments. I couldn’t find the rare adder’s tongue fern – it might have been a bit early for it; also the small pond which used to be carpeted with water violets is now bare of them. Leaning over this is a chequer tree (wild service tree). This has given its name to many pubs. Why? There are several theories.

Finally, we rested on a fallen log before returning home; having also heard a train rush by – a reminder of the speed of life of today. This experience is just one of the delights on our doorstep. Naturally, it is also a habitat for insects, birds and other wildlife.
Marden Meadow is owned by the Kent Wildlife Trust. It was an ancient hay meadow and is one of the few remaining unimproved neutral meadows which is annually cut and grazed. Also, it has been untouched by chemicals or plough. It now extends to three fields totalling 8.8 acres, with a small car park. In 1981 it was ordained as a Site of Special Scientific Interest and, to celebrate the 60th anniversary of our Queen’s coronation, it is one of the 60 meadows in the country to be called a Coronation Meadow. Our meadow is now so flourishing that, in 2011, a seed harvesting machine visited so our flora can grow elsewhere. Do visit if you possibly can.