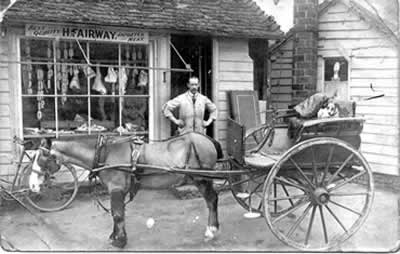 The Court House in use as a butcher's shop

The building known locally as the Court House (or Cross House) probably dates from the early 15th Century. For generation after generation this little timbered structure was the centre of local justice for Marden folk, as it was here that the lord of the manor held the old Court Leet which met twice a year. It was his duty to bring before a jury various alleged crimes and misdemeanours that came within the jurisdiction of the court, and to punish them by fines, a whipping or a period in the stocks. The village stocks were in fact situated outside the cross house until they were moved in 1882.

To the right of the picture you see the original lock-up which was used to imprison offenders. During the time of Rev Deedes, who was a JP, a local man was ordered by him to be held overnight in the lock-up for drunkenness, prior to being sent before the magistrate the next day in Cranbrook. During the night the man’s friends surreptitiously continued to ply him with drinks from the nearby Unicorn, until he became unconscious. On hearing of his collapse, Rev. Deedes ordered him to be released believing that the cold weather had caused it!

You can see from the photograph that the old lock-up had a chimney in it. This building was replaced in the 1980s with a replica, but this time without the chimney or fireplace.

The Cross house has not always been in the very excellent condition that we now see it in! In fact we are lucky indeed that it has survived at all! At the beginning of the 20th century Charles Igglesden in his work “A Saunter Through Kent” described the building as “A Lonely Neglected Little Square Structure, It’s Sides Dilapidated And Barricaded With Oaken Slabs”.

The cross house has, since its de-commissioning as a judicial building, had various uses and until recent years when protective bollards were placed around it and it had a major refurbishment, it was a constant victim of reversing and turning buses and lorries which frequently knocked tiles and timbers from its ancient structure.

Closer to our own times the Court House has been a butcher’s shop and the lock-up next door a cobbler’s. Today the Farm Shop provides a retail outlet for the farms and specialist producers of Kent and East Sussex.

Now it is valued and respected and hopefully its future as one of Marden’s most famous landmarks is secure.