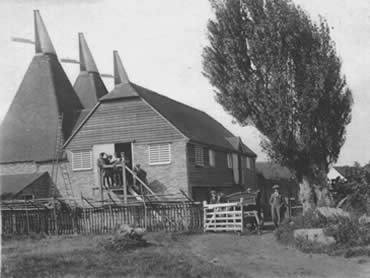 The 19th century saw the development of the typical oast house such as the one shown here at Chainhurst Farm and many were built in Victorian times peaking in 1878 when production of hops was at its height.

The cowl at the top was designed to swing away from the prevailing wind and so create a vacuum which drew hot air from the fire of charcoal or anthracite on the ground floor through a slatted floor above, where the hops were spread out.

The design of these oast houses was constantly under development. The first oasts were square as shown here. Then it was discovered that hot air circulated better in a round space so roundels were built. These however were difficult to construct so the trend swung back to square buildings and fans were used to circulate the air. Later the fire was enclosed and pipes were used to distribute the heat.

In time, oasts were built with louvres in the roof replacing the cowls, and became rectangular in shape. Modifications to the design of oasts continued into the 20th century. A local example is illustated here (left) when, in 1964, Tompsetts at Little Sheephurst were in the news for a particularly successful type of drier, which came full circle as it was once more housed in a single storey building.

For more information about oast houses and hopping in general visit the Museum of Kent Life website.