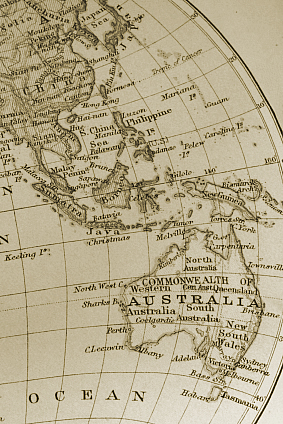 We know from the parish records and from the censuses that people came from other parts of Kent and the British Isles to settle in Marden, often as a result of seeking work. Equally we know, from correspondence from their present day descendants, that other’s moved away from Marden when times were hard to seek their fortunes overseas. In the early 1840s there were particularly bad harvests and there wasn’t room in the workhouses for all the needy. So families were encouraged to emigrate. In 1841 £100 was to be raised by the churchwardens & overseers “to contribute or defray the expenses of poor persons having settlements in this parish & being willing to emigrate, to be paid out of the rates raised for the relief of the poor”.

Whether or not Richard Bartlett and Lydia Quested, who were married in 1838, were in receipt on such funds we do not know, but they arrived in Australia on Boxing Day 1841. Richard was born in Marden and his parents, Richard and Ann Bartlett, who we know had been in Marden Workhouse in the early 1800s, both died in 1841. This may be the reason, together with extreme poverty and memories of the Workhouse that caused the couple and their young daughter to emigrate. We will never know, but the story of Richard and Lydia Bartlett’s life in Australia is told by their descendant Ronald Bartlett.

We have a very detailed description of Richard Swan, a young Marden man, who was convicted at Maidstone Quarter Sessions to 15 years hard labour for stabbing and wounding, and was then transported to Van Diemen’s Land (Tasmania) in 1842.

He was 5ft 6in, had hazel eyes, his hair was black, and so were his eyebrows and whiskers. He had an oval head with a fresh complexion, a long nose, a small mouth and his chin was long and dimpled. There was a scar over his left eye and scars on both hands. Richard Swan’s life is described by his descendant Lance J. Swan of Gwandalan, Tasmania.