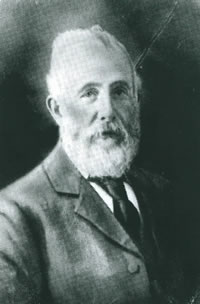 In 1841 the “Lalla Rookh” a 350 ton barque set sail from Gravesend to Australia. On board were 29 year old Richard Bartlett, a farm labourer, his 5 month pregnant wife, 21 year old Lydia (nee Quested), a servant, and their 18 month old daughter Sarah Anne. Together with the other passengers they were subject to a “Bounty” a sum of money dependent on their age and skill paid by the Government towards future wages. For the whole family this amounted to £43.

Arriving on Boxing Day 1841 in Sydney, the family settled first at Bamarang 160 km south of Sydney where a daughter, Matilda, was born and where Richard was employed as a ploughman.

In 1844 they moved to Numbaa where a son, Richard, was born, then to Mayfield where a daugther, Rachael, was born in 1846.

In 1848 the family moved to Brundee and it was there that Edmund, James Watson, Stephen, Rachael and Alfred were born, also Rachael died there in 1850. Brundee is adjacent to the Shoalhaven River and a flat low lying area. During the 1860s and 70s devastating floods caused by heavy rain wiped out the whole area: buildings, livestock and people being washed out to sea. The floods or the death of their baby, Lydia, may have been the cause of the Bartlett family moving to the town of Milton where they were one of the pioneer families of the district. 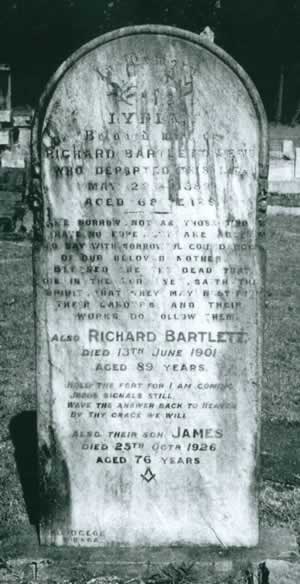 The grave of Lydia and Richard Bartlett in Sandridge Cemetery, Mollymook

Soon after they moved to Milton another son, William, was born in 1862, followed 3 years later by Joseph. Records show that Richard and Lydia had a butcher’s shop in Milton near the Congregational Church. This shop stayed in the Bartlett family till the 1920s.

Richard and Lydia must have endured a hard life in New South Wales, though a full and challenging one when one considers the conditions of roads, housing, transport, hygiene, food and medicine compared with today. Richard and Lydia made a wonderful sacrifice so that their children could have the benefits of their labour. Within their own lifetimes it was recorded that Richard and Lydia had 12 children, 64 grandchildren and 67 great grandchildren.

Lydia died in Milton 12 years before Richard at the age of 66, in 1889. Richard was 89 years old at the time of his death in 1901. It was probably his son William Edward’s wife, Sarah Ann, who nursed him through his last illness, cancer of the mouth. He apparently appreciated this care because she was the sole beneficary of his estate. After his bank loan had been paid off this amounted to furniture worth $24.10 and $11.90 in cash: the result of a lifetime of work.