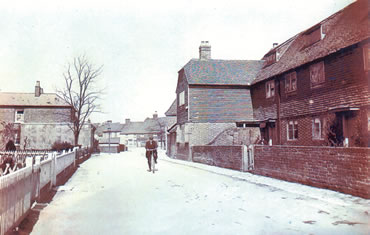 The Marden Workhouse, or Poorhouse as it was also known, is shown here on a postcard, looking up into the village, in what is now Albion Road but was then known as America Street or Earl Street. It is the prominent building on the right with the large chimney. The adjoining cottages were called the Parish Cottages and were part of the Poorhouse, they housed staff and some families.

We know little of the building itself other than it was erected at a cost of £529.2s, which was borrowed from Mr Stephen Walter on a bond bearing the date 20th Feb 1790 at 4% per annum. However records of the work of the Poorhouse do remain.

We know from the Marden Vestry book that by 19 September 1836 the building & outbuildings were unoccupied, and the garden & its ½ acre were exceedingly good land. Church wardens Philip Le Geyt, Stephen Hayes & Wiiliam Jude and overseers James Day & Richard Southon consented to the Guardians of the Poor of the Workhouse selling the premises. However by 16 February 1838 Stephen Walter, mason & Daniel French, carpenter produced a plan for altering the workhouse. In 1841 £100 was to be raised by the churchwardens & overseers “to contribute or defray the expenses of poor persons having settlements in this parish & being willing to emigrate, to be paid out of the rates raised for the relief of the poor”. Again in 26 February 1848 there was another meeting about emigration funds. However despite these efforts it appears that the Workhouse continued to be used.

Among the bills paid by the Vestry were the following:

The building was eventually sold to the Rural District Council in about 1962 for 2s 6d (about 12p!). A few of the inmates were still living there. “Jilly” Ruffle was living in the building that had been the Poor House mortuary. He and the others were rehoused.

After the buildings were demolished along with a row of neighbouring cottages, the Council built “The Allens”, affordable housing for the elderly, on the site. This name was taken from Mary Allen and her son John Allen, 18th century philanthropists.