The world’s first postcard appeared in Austria in 1869 and in Britain a year later. The picture postcard began to appear a few years later and during the Paris Exhibition of 1889 they received a big boost in popularity as a means of sending messages. It triggered off a craze for postcard collecting and caught the public’s imagination, so much so in fact that in their heyday between 1890 -1920, they even took the place of traditional family photo albums.
Virtually every country in the world produced cards in ever increasing numbers. In 1902 Britain was the first country to divide the back thus allowing the address and message on the back and a complete picture on the other side.

One of the attractions of the postcard was that it was sent at a cheaper rate than a letter.  From 1870 to 1918, the postal charge was ½ d, and from then until 1940, just 1d at a time when letters cost 1d and 2d respectively.  When a separate charge for postcards was abolished in 1965, the rate was still only 3d.

The years before the First World War have been called ‘The Golden Age’ of picture postcards as everybody used them for messages before the telephone was widely in use. Cards of all descriptions and subjects were produced and personal collections were popular, many of these cards being produced in Germany. Of course with the outbreak of hostilities this supply came to an end.  And if you think instant communication is something from the modern technological age, there used to be 11 post boxes in and around Marden, emptied 3 times a day (with deliveries to match) as well as on Sundays and even Christmas Day.  I remember as a child the postman calling (it was normally Monkey Redman) and being offered a glass of something for the day.  Often, he had already had several such offers before arriving at our house!

Cards such as those published by ‘Valentines of Dundee’ and ‘Raphael Tuck’ in particular, were especially sought after as these were of the highest photographic quality. During this golden period, postcards featured every conceivable subject, including hand painted picturesque views of famous sites and buildings, and photographic images of major political and sporting events, as well as recording and celebrating important moments such as early aviation. They were also an extremely useful and popular way of advertising your business or product.

After the First World War, the role of the postcard changed becoming increasingly associated with the holidays or visits to friends and relations in other parts of the country.  Photographers made good business by travelling their locality and taking photos of villages, landmarks and beauty spots that could be turned into picture postcards.  Sweetman’s of Tunbridge Wells and Salmon’s of Sevenoaks (still in business today producing postcards and calendars are just 2 examples).  Some they published themselves, but more often they were sold on to shops in the area for onward sale.  My grandfather did just that, as did other Marden retailers such as Bailey’s and Dovey’s.  Their name would appear on the bottom of the card as additional advertising.  The shops could also request specific photographs to be taken adding a certain exclusivity to the card.

Nowadays, such topographical postcards are of particular interest to the more historically minded collector. They are an excellent way of showing how a particular resort may have changed over the years, how people dressed and which modes of transport were available there at that point in time. Some collectors specialise in cards from a handful of resorts only, thus building up a pictorial and social history of each place.

Later still, after WW2, the cartoon-like “Seaside” postcard made popular by such artists as Donald McGill, master of the double-entendre were a must buy, but do not form part of the scope of this exhibition, amusing though they be.

The History Group have many such Post Cards – showing how the Village used to look, and many have interesting ‘snippets’ on the back which shows how times have changed.

In early June the Chair of the Marden History Group received a copy of a publication called ‘Meantimes’ from its author Kim Taylor Parker.

It is the story of her family’s life in the Greenwich/Deptford area of south-east London from the First World War to about 1945. Our receipt of the book was prompted by the family’s love affair with hopping in Marden on Hall’s farm – the highlight of their year for so many years.

Kim’s ability to capture the flavour of the life of her London family suffering near poverty and domestic uncertainty through two world wars is captivating.

Intrigued by the story the History Group invited Kim and her family to Marden. The party of seven included her husband David, her father Ray and Uncle John, her brother Lee and her young nephew and niece Sam and Brooke. The Library and Heritage Centre was specially opened on Sunday 21 August so that their visit could include a sight of the soon to be changed exhibition focused on Marden shops past and present. 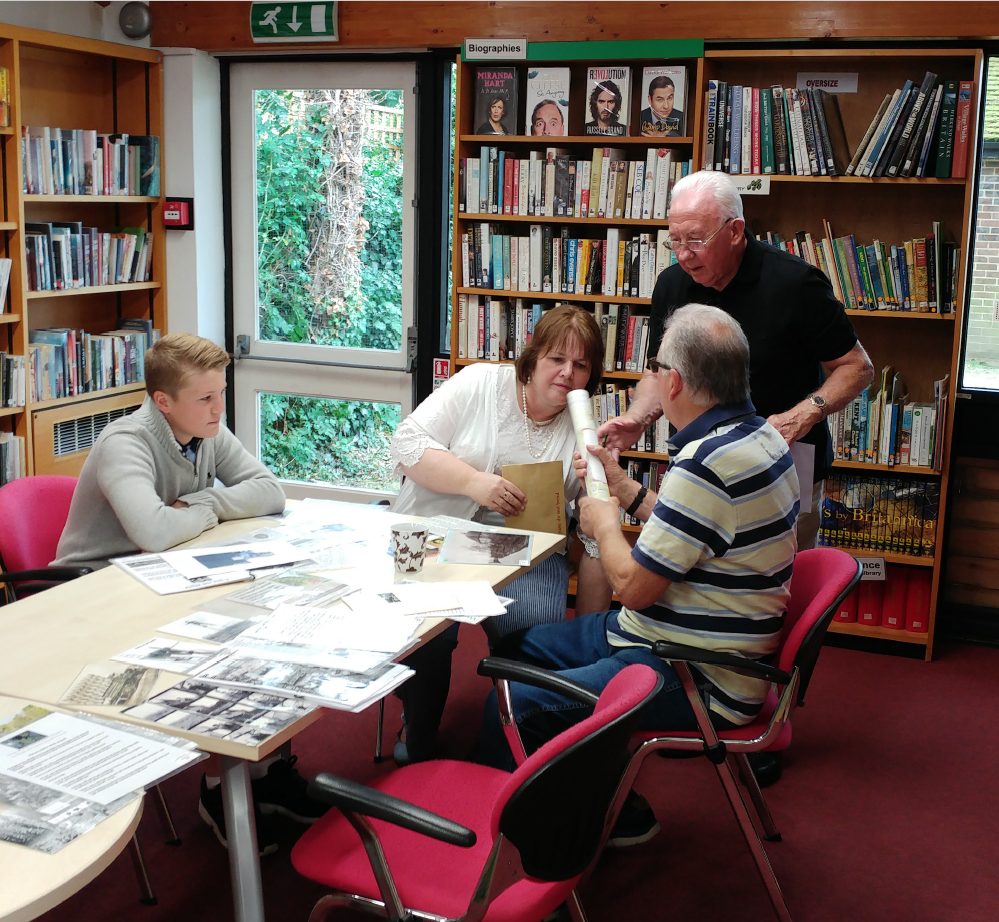 The story involved a family, grandmother Mags, parents Sukey and Bill and children Maggie, Billy, Terry and our visitors Ray and John.

They were welcomed by the Chair, Eunice Doswell, Colin Whittle, Ian Grimes and Ian Newton. 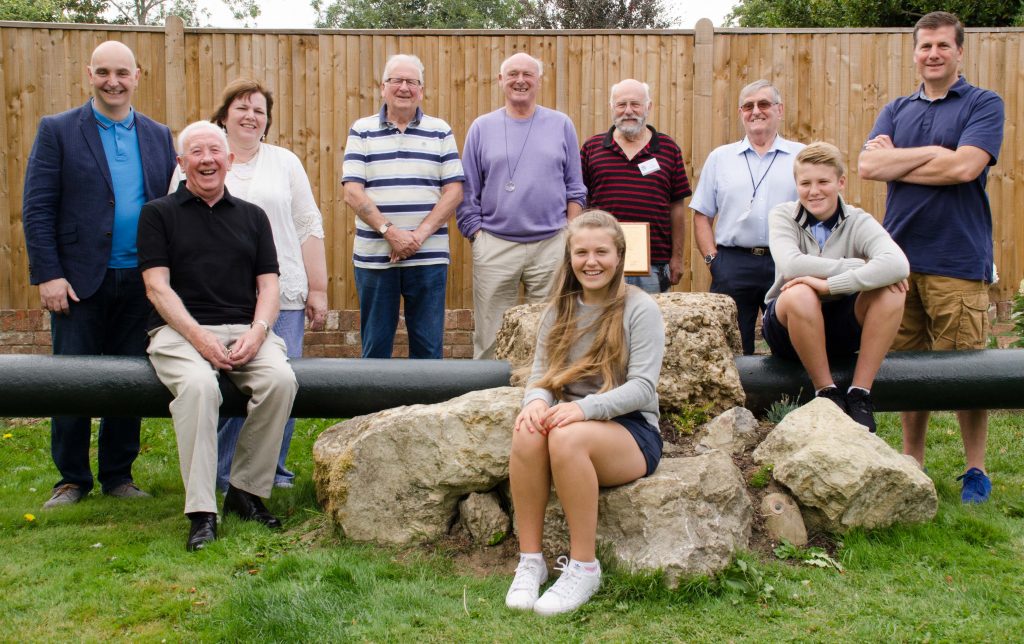 Steve McArragher, Geoff Burr and Colin Addison had cleared the public footpath leading from the Goudhurst Road just passed Spring Grove to allow the family to re-enact their traditional walk from the West End Tavern to their workplace Hall’s farm. John Hall gave his permission to allow the family the freedom to roam. 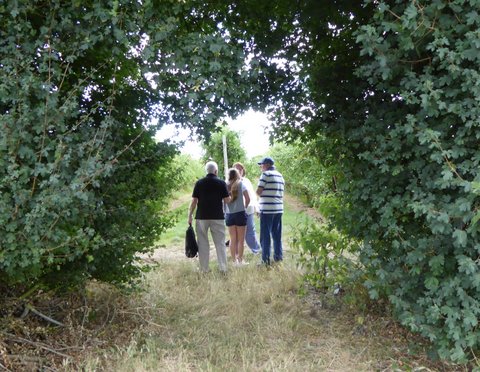 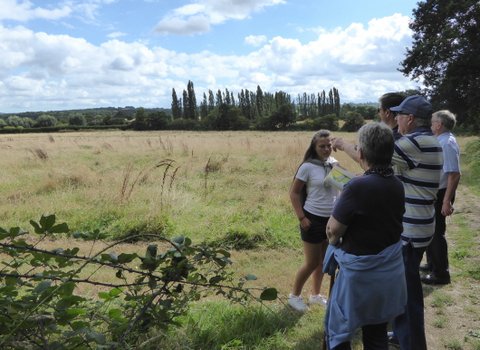 After a splendid Sunday roast at the West End Tavern the family, accompanied by Eunice, Colin and his wife Pat, retraced their journey from pub to their hut. This included the unplanned but welcome meeting with Nick Hall, grandson of the H E Hall with whom they were familiar. Peter Hall, sadly, was on holiday. We believe he would have thoroughly enjoyed showing the family around.

The brothers had drawn a map of the area as it was in their day, using names for the various locations such as ‘The Piggery’. 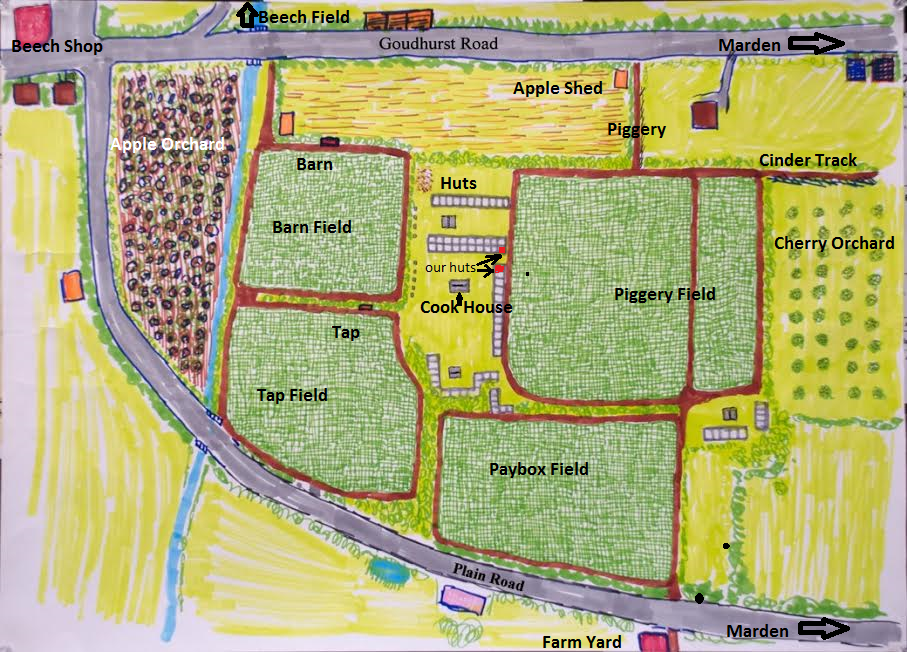 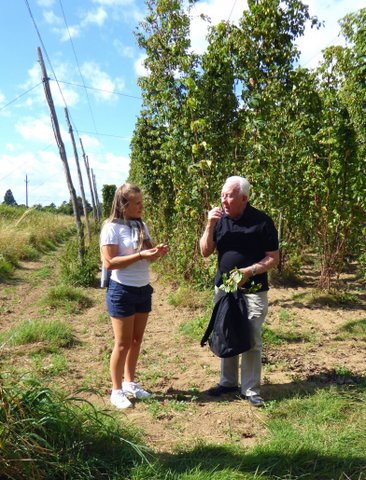 Brooke and John smelling the hops which are still left

The enthusiasm shown by Ray and Johnny in recapturing their youth was seemingly matched by the younger generation Brooke and Sam, in exploring the oft discussed site of part of their family history.

The day concluded with afternoon tea, i.e. coffee or tea, and cakes from the farm shop at the Chair’s home, appropriately an oast house.

It would appear that the family had never actually entered an oast house so, together with a detailed painting of a cross section of the oast as it was, the group explored the oast as it is now. 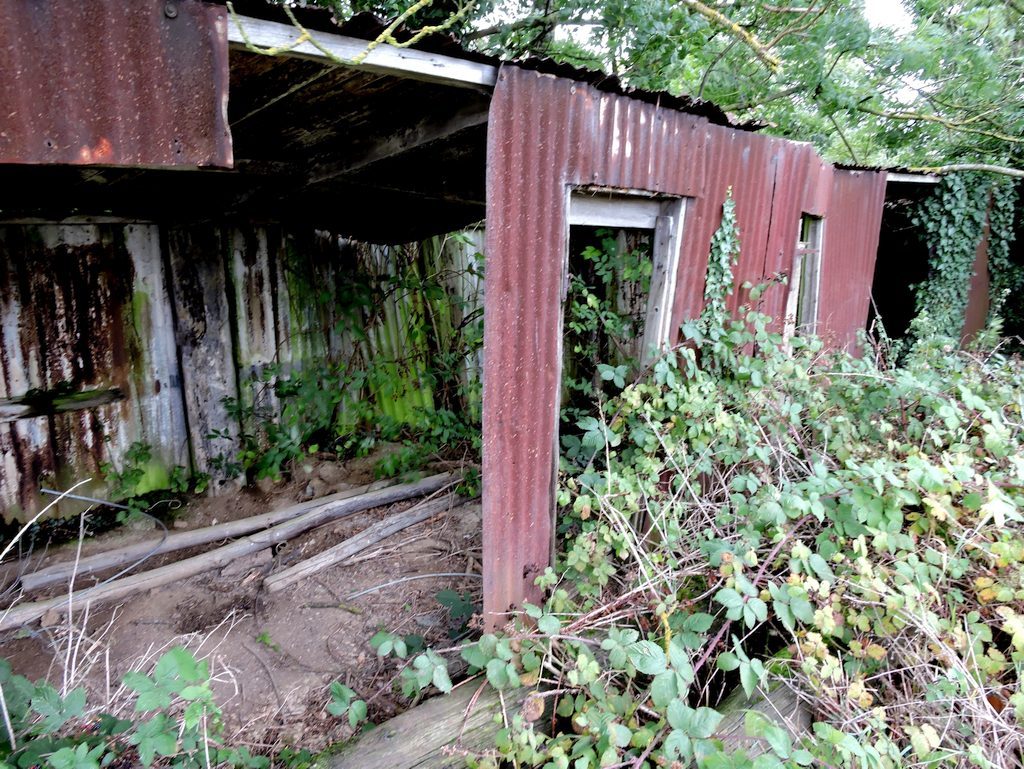 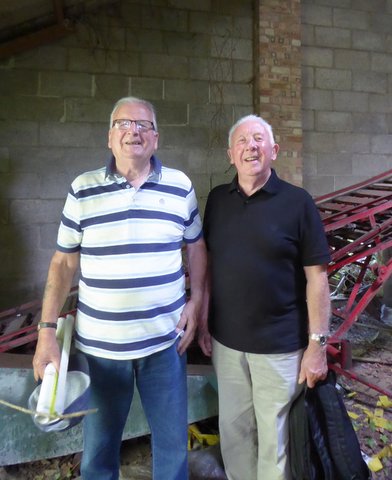 Ray and John Taylor in the old apple store

After much fun and reminiscences, the family departed. Kim and David I believe arriving back home in Norwich past midnight.

Emails were exchanged immediately and their flavour indicates what a splendid day it had been for all concerned.

We suspect and hope that it won’t be our last meeting in Marden.

A prize for our new garden

When we heard that our piece of Pluto pipe was surrounded by a lump of concrete one of our members suggested that a rockery around it might disguise the starkness of the concrete. Other members set to and more rocks were assembled and earth and plants were added.

Marden had entered a competition and the judges for Cranbrook in Bloom have awarded us the prize for the best entry in Business/Community Group – another plaque to put up!

We are also waiting patiently for the hydrangeas from Golden Hill nursery, planted along the fence in the car-park, to bloom. This area is becoming quite a feature and the Heritage Centre has had many visitors coming in to enquire about our piece of Pluto. 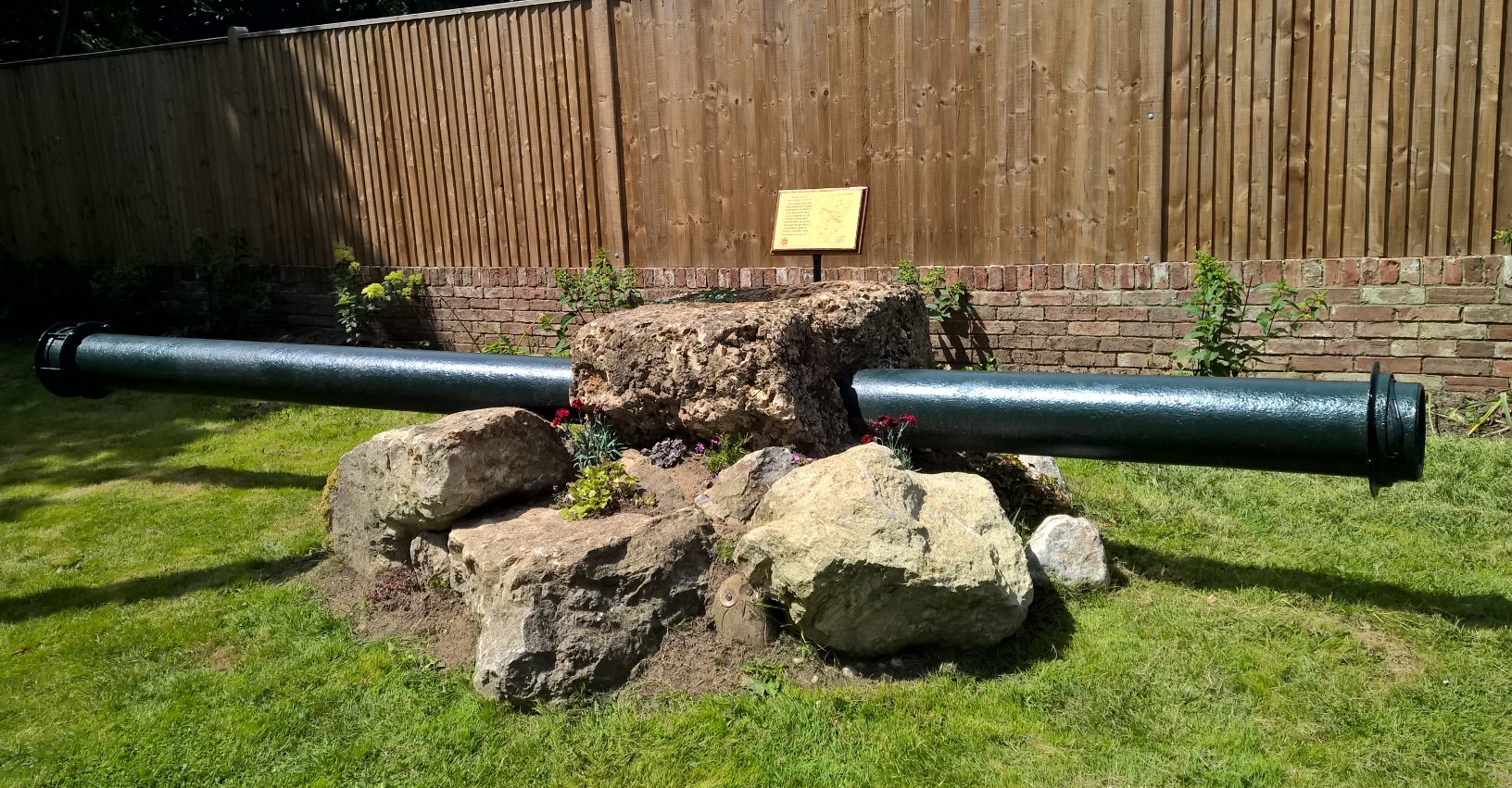 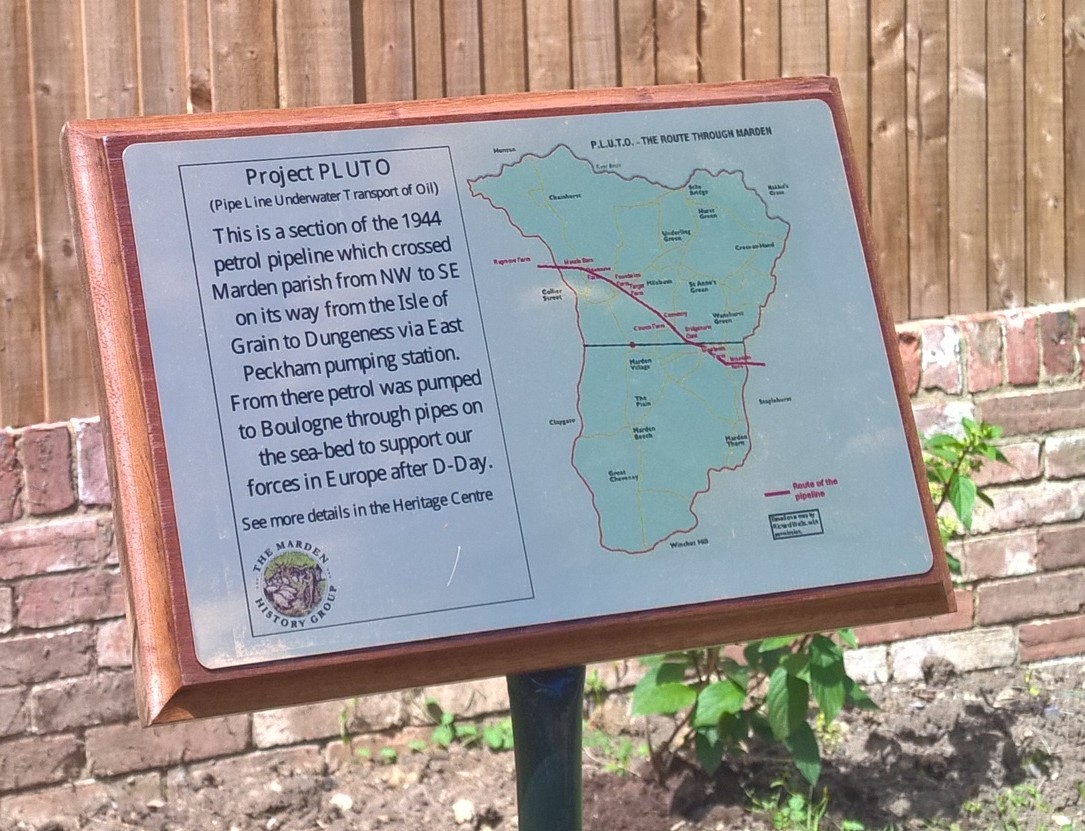 We discovered that there was a section of the PLUTO pipeline, relaxing most of the time, at Gatehouse Farm in the Parish of Marden, preserved and moved from time to time by farmer Robert Day with the help of Lennie Furnell. This prompted speculation about its suitability for a place on the Library & Heritage site, already adorned by a K6 red telephone box and a World War II air raid siren.

In February 2015 the Marden History Group was granted a licence by Maidstone Borough Council to locate the PLUTO pipe and its concrete joint on the site.

PLUTO’s history has been recorded by Chris and Marie Gosling in the Marden History Group’s publication “Marden and PLUTO”.  This route map recording PLUTO’s route through the parish is based on one drawn by Richard Wells, a former chair of the Marden Society, with his permission.

Early in 2016, encouraged by the prospect of the Marden in Bloom event, the Marden History Group arranged with Robert Day and our local firemen to try to transport and install the very heavy PLUTO section on Saturday 30 April 2016 at 3.00pm. 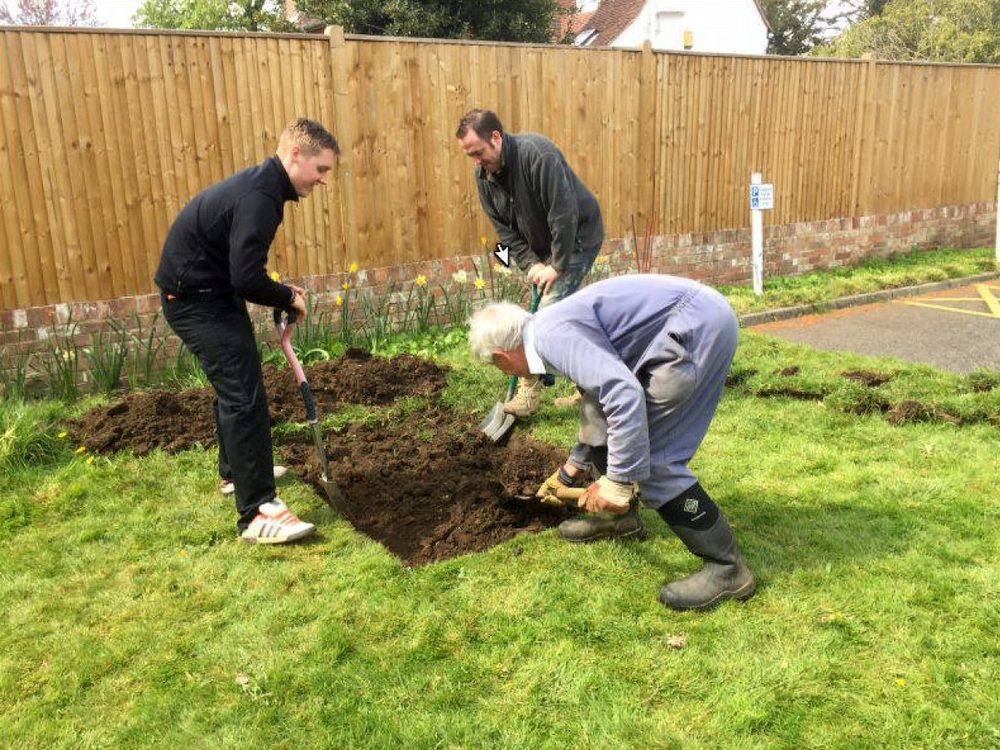 With a few hasty changes made to the size of the excavation, the “section” was dropped into the cavity without difficulty. 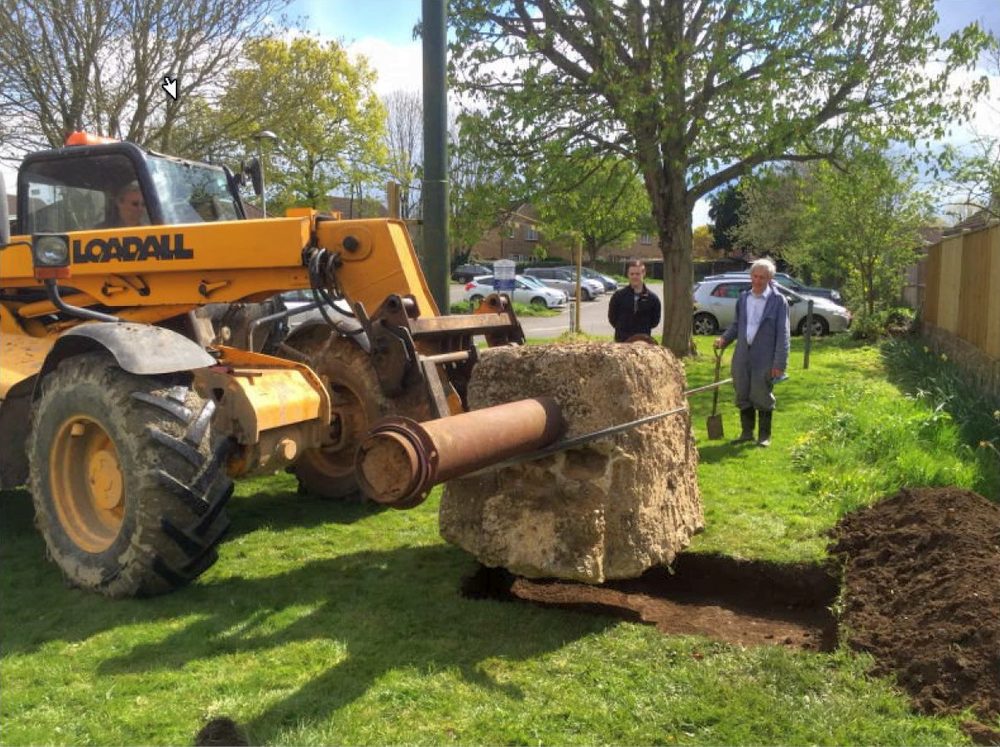 After a few tentative strokes by the Chair, the pipe was painted by Andy Wardley and Grant Oliver using Hammerite metal paint – smooth dark green. The site was tidied up by Peter Kershaw ready for the anticipated creation of a rockery, based on the concrete joint, which will include pieces of stone from the recently damaged and replaced village mounting block. 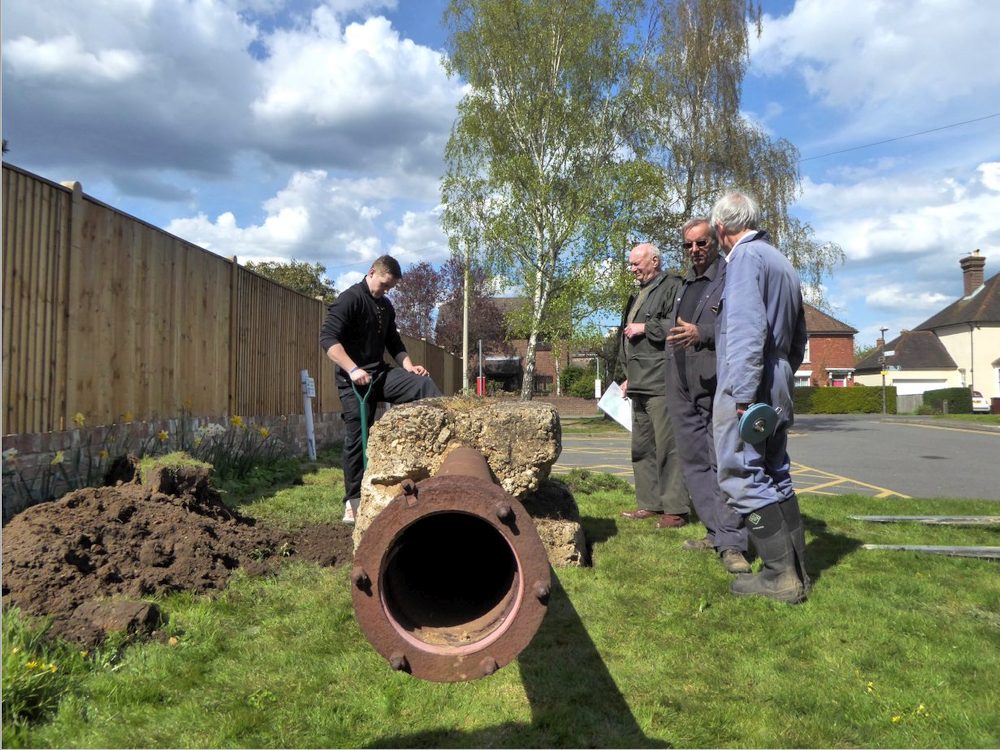 This 15 foot section, with the concrete joint, indicates we believe that the joint was created in order to allow the pipeline to slightly change direction, as portrayed on the “map” at the junction of Murzie and Gatehouse farms. 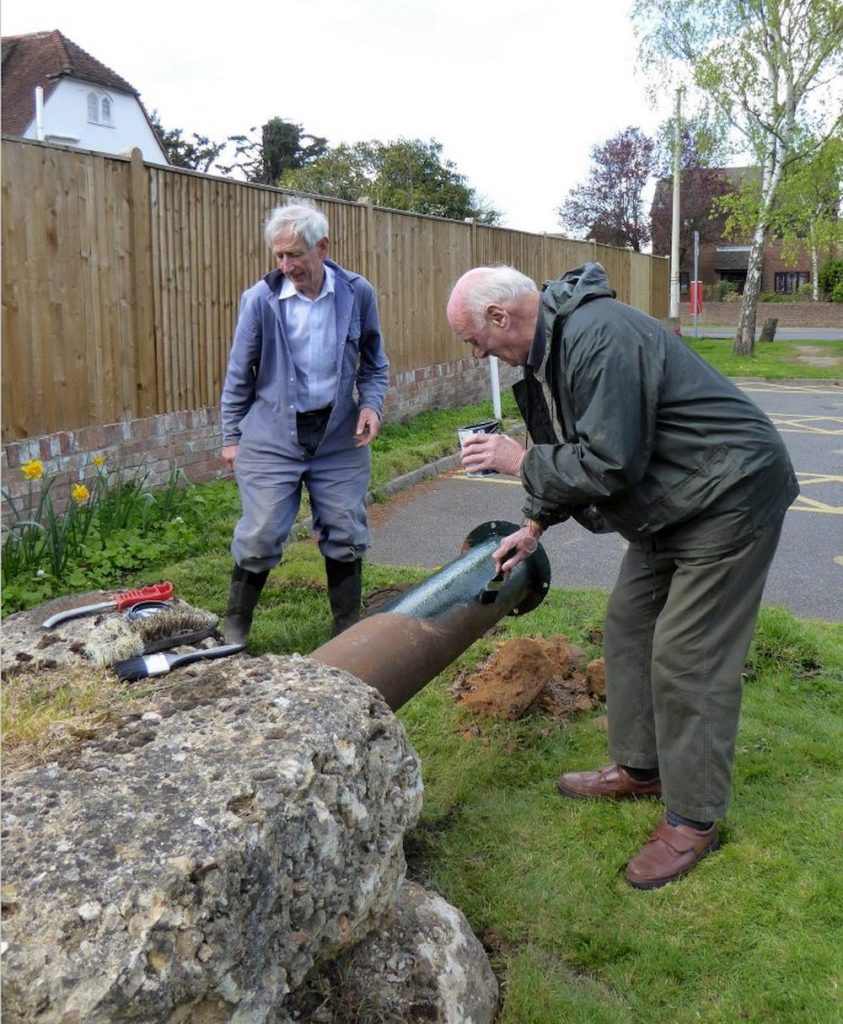 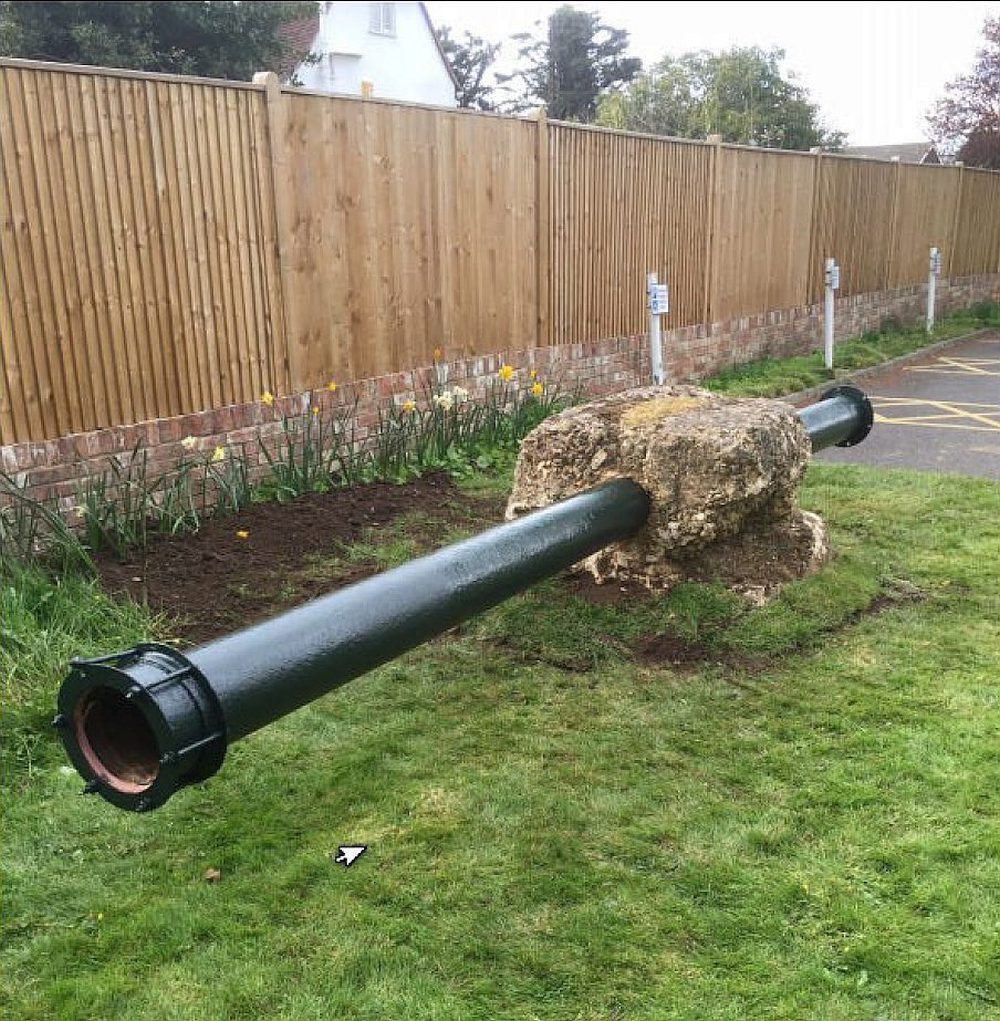 PLUTO was one of the major engineering achievements of World War II. The History Group believes that this “section” has a significant place in our Parish and national history.

Also showing on the same night are some earlier Marden Films. These films depict our village over the last 50 years. The latest film has never been seen before. It should be a great evening.

No tickets are needed, just come and enjoy the memories. 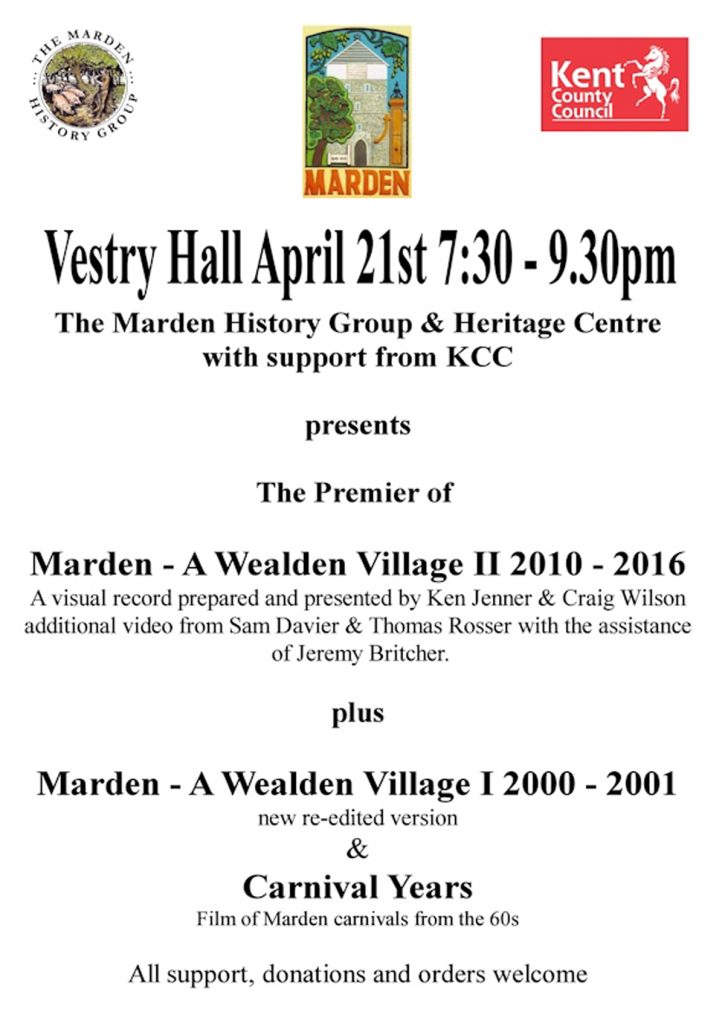 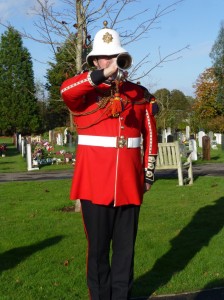 This is a photo of Mo Gillis-Coates playing the Last Post at Marden cemetery where the parish council and villagers remembered the dead of both World Wars.

A cherry tree was planted by Dorothy Reed, the chairman of the Parish Council.
Several councillors read poems, children and adults scattered poppy seeds and there was singing from a village group.

This all followed a special church service, the opening of the Heritage Centre’s second part of their exhibition on WW1 and the sounding of the the ‘Alert’ and ‘All Clear’ on the newly installed WW2 siren.

And the sun shone from a brilliant blue sky on a warm November
day.