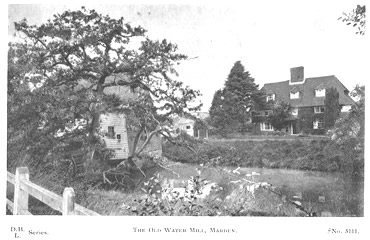 Postcard of the Mill

The Mill, sometimes called Pattenden Mill due to its position near the bottom
of Pattenden Lane, existed throughout the nineteenth century,

The mill was owned by at least three generations of the Hammond family.

The first of these was William Hammond, who died in 1808, followed by his son, also a William, who died in 1861. He was succeeded by his third son, Henry. His eldest son, also William, was a miller at Hunton and his other sons Charles and George were farmers at Lamberhurst. Henry Hammond was a keen sportsman, particularly fond of hunting. He even kept his own pack of hounds. It is said that he was understandably annoyed at the presence of the turnpike which stood at the village end of Pattenden Lane, and through which his wagons, loaded with sacks of flour, had to pass to reach the station. He avoided this by going behind the house now called Church Green Cottage, and coming out somewhere near the station entrance.

After 1870 wheat began to be imported from Canada, which was of a better quality than that grown in England. Growing grain crops became less profitable and so the smaller mills went into a decline. Henry was slow to curtail his lifestyle, but by the 1880s he was taking in paying guests in order to make ends meet. These were ‘gentlemen’ from London, who came down periodically for shooting & fishing. When Henry Hammond died in 1892 the mill fell into disuse and stood derelict until about 1912, when it was dismantled and sold for scrap.

Some traces of the old mill remain to this day, particularly the mill stream and pond.