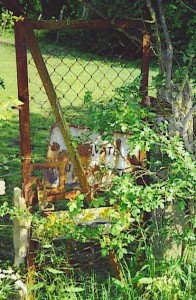 “Operation ‘Pluto’ is a wholly British achievement and a feat of amphibious engineering skill of which we may well be proud.” (Prime Minister Winston Churchill).

“I would like to express my warm appreciation of what the ‘Pluto’ pipelines have done in supplying U.S. as well as British Forces into the heart of Germany.” (Supreme Commander General Dwight D Eisenhower).

To support the allied invasion of Europe in 1944, petrol pipelines were laid on the sea-bed across the English Channel. The overland pipe, which carried fuel from storage depots in the Avonmouth and Mersey areas through Walton on Thames and East Peckham to the pumping stations at Dungeness, came through Marden. It crossed the parish from NW to SE, the route being approximately Murzie Barn and Gatehouse Farm (Chainhurst) – Foundation Farm – Target Farm – Hartridge – Bridgehurst Oast – Moatlands Farm – Mountain Farm. Evidence of the pipeline can still be seen in a number of places.

The route of PLUTO through the parish

Tom Collins was tenant and later owner of Mountain Farm in Marden from 1924 until it was sold in the 1960s. Tom also operated, with the help of his five sons, Rugmore Farm at Benover. Curiously both Rugmore and Mountain Farms were in the path of PLUTO. Frank Collins (1905-1999), one of those five sons, spent most of his long life at Yalding although he is buried at Marden. He remembered: “In 1942 [sic], the Government decided to put a pipeline from the oil depôts right down to the coast, in preparation for the Second Front. They cut right through the farm ground. When they got to our farm at Rugmore, the corn was nearly ripe but they just went right through, the crops taken about 20 yards wide. They had their own valuers to assess the damage; they paid a fair compensation. When the oil started to go through, men had certain lengths to walk to see if everything was OK. Each fence or hedge they came to they put a kind of stile for the walkers.” 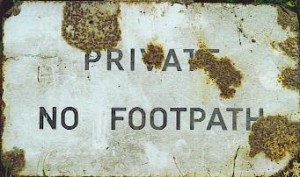 Boys will be boys

The buried pipelines were walked daily by officials checking for leaks and making sure nothing had been built on them. They had the authority to order anybody, including service personnel, to remove any obstructions. The section between Yalding and Marden was the responsibility of one Bill Waterman. He doubtless came across the young Mike and Robin Judd, who used to play along the line. Whether he ever came across ‘Titchell’ Harmer is not known. ‘Titchell’ Harmer was one of three Marden brothers. He joined the army, but turned up at Rugmore Farm towards the end of the war, claiming to be on leave. He was given work on the farm, and after working at Rugmore during the day, he would walk back to his girlfriend’s at Marden each night along the PLUTO pipeline.

As far as the Marden section of the pipeline is concerned, most of it was dug out in the late 1940s/early 1950s. At this time George Flisher bought a number of the concrete posts at 2/- (10p) each from neighbouring farmers and used them in the construction of pig pens at his 4-acre Windens Barn in Park Road. The pig pens were demolished when the land they stood on was bought by Little Mountain Farm and the materials were used in the foundations of a new building: no trace of the posts remains.

Len Furnell works Gatehouse Farm, as did his father Tom before him. He remembers much of the line east of the Hunton Road being dug out as late as the early 1990s, but just as Tom used to come across parts of the pipe when he was ploughing, so Len came across a 15ft length complete with concrete anchor block as recently as 22 January 2002.

The cross-Channel pumping operations ceased at the end of July 1945.

For more details, see our publication “Marden and P.L.U.T.O.”