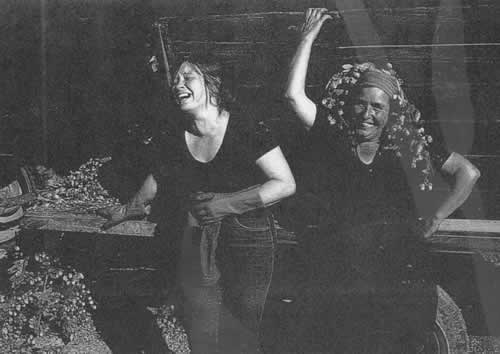 Celia Gudgeon and her mother enjoying life in the hop fields

Gypsies and friends have been apple and hop picking at Marden Thorn Farm, living in their caravans, since the Boer War. I interviewed them during the autumn of 2000. Billy’s great-great grandfather was the first of his family to work here.

Billy met Celia Smith some 41 years ago on the farm and they have returned annually until the year the farm was sold and their labour was no longer required. They would have bought their camping field, but it was sold to “a local”. Billy remembers travelling to Kent in a four wheeled cart with his father as a very small boy. They travelled in a wagon train starting in Edmonton, crossing London Bridge, down the Old Kent Road and separating at Lewisham from those who were travelling to Sussex. He believes it took three to five days, stopping at various watering holes on the way, the last at Wrotham or Yalding. They drove right through Maidstone on occasion.

They apparently all carried a letter of prospective employment from the farmer, William Day, and were given a dated voucher for those who preferred to travel by steam train. Billy remembers his mother objecting to him going with the men because of their carousing and he subsequently travelled by train from London Bridge. He remembers with pleasure the crowds, perhaps 500 families, congregating at the station throughout the night and the sense of anticipation, the fun and singing. He travelled in the guard’s van.

Celia recollects her family travelling from Walthamstow through Stratford, through Old Ford, Bishopsgate and the Blackwall Tunnel. They estimate there would have been 6-7 wagons.

They recollected the Plain Inn nearby, now a residence. The landlord they thought to be quiet and snotty nosed and remember that only “home dwellers” could use the one bar. The butcher used the premises on Saturday, the bakers on Sunday? They were also able to purchase sweets. Billy recollects the Bricklayers Arms, now the Wild Duck and the landlord, Clarence, who frightened the lads, probably for good reason, with his gout ravaged fingers.

Celia recollects her mother Nancy selling pegs and flowers in her arms or hawking basket.

The caravans are, and were always, a source of pride. There were no toilet, washing or cooking facilities incorporated, as these were deemed unsuitable and unhygienic for living accommodation.

Their courting rituals were also governed by ancient standards, standards that do not allow drinking and just one boy or girlfriend, to whom they must become engaged and then married.

Celia and Billy’s daughter, Kay, has followed exactly the same time honoured practice as her parents in meeting her future husband here. She has a remarkable likeness to her mother at the same age. The children in the past were always born in the caravans with the help of midwives.

The food and the cooking have not changed much. Traditional meals prevail and are still cooked in the big pot. Meat, bacon, steak & kidney pudding, rabbit pie, hedgehog pie – meat that is dark and sweet, Joe Grey, ie bacon, onions, potatoes, tomatoes, Oxo, also spotted dick and currant pudding. The food was frequently caught through “pugging” ie ferreting and with the use of lurchers. Titbits included cow’s udder, bull’s balls and sweetbreads.

Celia’s family were literate. Her daughter Kay is not so. Two other daughters though are an accountant and shop manager respectively. Carolyn Smith, a relative, who is still as dark and exotic as her ancient Indian ancestors, said that illiteracy certainly helps one’s memory and not just for re-telling ancient and contemporary tales in either English or Romany, but for remembering lengthy shopping lists and prices. Billy told me that you could always spot a gypsy: he’ll be the one who is reading the newspaper upside down and he will be the one without life insurance. ……..

The sale of Thorn Farm has brought this 100 year tradition to an end, and for Billy, Celia and friends, the end of their family tradition and part of their way of life since their memories began. Gone forever are the misty autumn days in a familiar loved place near Marden, surrounded by old friends and memories.

I met Celia and Kay for the last time in autumn 2001. They had come down for a last look. They sat alone in their caravan, the only one on the otherwise vacant field. Their sense of loss was palpable.