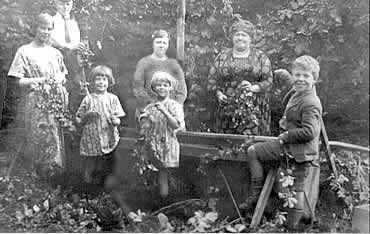 Working in the hop garden

The following extracts have been taken from

“OUR LOVELY HOPS, MEMORIES OF HOP-PICKING IN KENT”,
an Age Exchange Publication available from Amazon.

“We used to go hop-picking from Deptford, right from when I was born. I think I went down there in the pram. My elder brother was 3 years older and my younger brother 2 years younger. We were always together & they had it drummed into them they had to take care of me. My father made a wooden box & bought some pram wheels second hand. He fixed the wheels under the box & a handle on it. That was the one box we had all our luggage in. We also had a tin trunk, it was Grandma’s. This would be tied on top of the box & we had to push it to New Cross Gate and we caught the 4 o’clock train in the morning down to Marden. We couldn’t afford to pay the fare, so my Dad lifted me and Alf over the wall. We knew where to cross the lines to be safe. Until the train left the station we were pushed under the seat. I think they knew. People would be taking their cats, budgie or dog on a lead, in a box or a bag.” 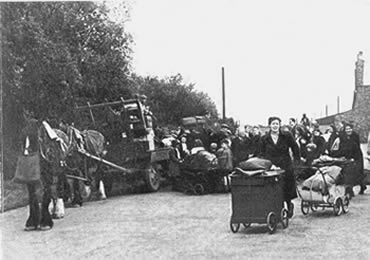 “And then when we got off at Marden, the farmer used to say, “Right, you’ve got wheels so you can push your luggage. We’ll take the trunks.” We travelled to the farm in the farmer’s hay-wagon sitting on the luggage. He’d take the women & children.”

“When we got to the farm we were given wooden huts, the huts that they used to store their stuff in through the winter. And I suppose the hut itself was about fourteen foot square. A third of it was living area and the rest was a white-washed wooden slatted bed like a big bench coming out from the wall. It had a chalk floor, hard trodden down, chalk on earth. The black box, my grandmother’s tin trunk, sat there like a a bedside table. We didn’t empty it because we had no cupboards, no nothing.

The bed itself was made out of faggots, they were twigs from trees tied in bundles. And they were brought round and delivered at your door. You cut the cord and laid the faggotts out. And then we had a mattress cover and they gave us straw. So we filled this mattress cover full up with straw and put that on top of the faggotts and that was our bed.

You’d see families of ten and twelve in the huts. And we took our dog, our Queeny. And there were galvanised roofs. So if it poured with rain you never got no sleep. Rattled! It used to go like mad.” 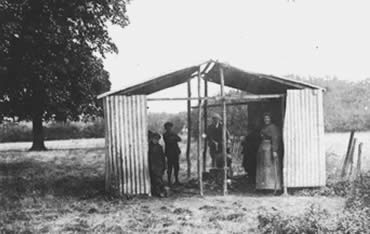 “We had like a camp fire outside like the boy scouts have. You could do that outside your hut till it rained. Then there was one particular hut which was made into what they called the cook house. This was set up with bars across all round to cook your dinner on. Everyone one had the same, it was all boiled – everything all in the pot together”

“When you went up to the fields it was always a cold morning: foggy and damp. And yet you pulled that bine. And then in the afternoon it would be boiling hot. And your hands would get dirty and black and smelly. Hop hands. And then you didn’t have a bath or anything.”

“My Dad was a pole puller. The bines grew in fours, and as you pull them down over the bin you sometimes leave the head behind. My Dad’s job was to go along the rows with his pole with a hook on the end and knock down all the heads because they were the best of the hops.”

“White hessian flour sacks were used to make aprons. My mother put a big pocket in, so that her tally book was always in there, and her purse. One day she was bending over the hop bin & lost her purse in the hops. When she realised she’d lost it she sent us round to see Mr Day. ‘Right he said, you come here with your brothers & we’ll find it.’ They took us to the top floor of the oast, the hops spread out on the floor with slats & fine mesh. It was very hot, the hops were put out to be dried. And it’s knee high deep. We waded through & we kicked. Like being on the beach with sand really. And we found it.”

“There were young babies in their prams on the field. They’d tuck those children in and push them down the far end of the field where it was all quiet and leave them. You could rest assured that nothing would happen to those babies. If someone started singing on the field, everyone joined in, and it was lovely to hear all these people singing.”

“The evenings were terrific. It was lovely getting together round the fire with the piano accordion going. Everyone sang, ‘My old man said follow the van’, all the old songs. People used to make up their own words. There was a tiny little pub called The White Hart and we used to sit there on a little seat, give the children some lemonade, and then come back & cook the dinner.”

“We never got rich out of hop picking. We used to have a loan out of it through the week to buy the food until our men folk came down. If my mother came home with a 5 pound note after 3 weeks work, she’d made a lot of money. She always went & bought something for the home which we couldn’t do otherwise. One year she bought a 3 piece suite for £3 10s. That was lovely.”