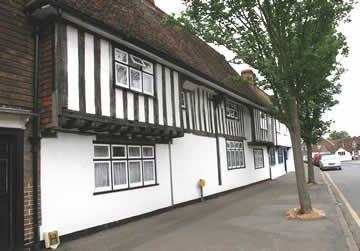 Turnpike house as it is today

Mike Judd writes about Turnpike House and the businesses that have been carried on from it:

Turnpike House is a four bay Wealden House. It was built around 1430, and is contemporary with White Lyon House and Bridge House. The main chimney was inserted at least one hundred years afterwards, and soon after that the central hall was made into two floors. The house has two wings, east and west, added in the 17th century, probably as a result of gavelkind(system by which a a dead man’s property was inherited equally by all the sons, and the widow getting one half as her dower), and is abutted on both sides by houses of a later date. The east wing was a separate house in the 19th century, until about 1880, consisting of two rooms up and two rooms down. At one time a “Dame School” was held in the back room, later known as the “Wash House”. The separate front door remained until the early years of the 20th century.

When the butcher’s business started is not known, but there was certainly one there in 1845 and probably for some time before that. The butcher in 1845 was William Williams whose gravestone still exists in the churchyard. He died in 1848 but the business was carried on by his wife Susan until she died in 1861 when it was taken over by one Joseph Hampson Adams, whose gravestone also still exists.

He died in 1864 aged 28, but he had a young assistant named Henry Cranham, known as Bob, who in the words of one of his descendants, married Mrs Adams in order to get the business! Bob Cranham was a character- perhaps not entirely admirable. My Grandfather, who knew him well, said that he was a man who could readily adapt himself to whatever company he was in, and that he was an athletic man who had a party trick of placing one foot on top of a pub bar and pulling the rest of himself up without using his hands.

Unfortunately, he spent too much time in pubs and when his wife died in 1879 he went broke. The business then passed into the hands of George Offen who came from Smarden and whose wife, Mary, was related to the landlord, one William Bean.

George Offen stayed for about 18 years, despite the fact that Bob Cranham, who soon remarried and had another family, set up against him in what is now No.2 Maidstone Road, but he was not very successful there and eventually died as a result of falling out of a cherry tree.

Towards the end of his tenure, George Offen seems to have become short of money and pushing his luck, called upon my grandfather, Thomas Judd, with whom he was superficially friendly, and asked him to settle his account. Tom Judd said that he had paid him, and George Offen said he hadn’t. So Tom, who had never trusted this butcher, went to his desk and produced a wad of receipts with the words “How many times do you want paying, George?” Without a word of apology Offen turned and walked out of the house.

The next butcher was a man called James Miles, whom my grandfather much preferred and my father could remember his parents entertaining Mr and Mrs Miles at Southon House. Unfortunately James Miles was no businessman and failed as a butcher. It then appears that after the Miles family left, the landlord put in Jack Offen, one of George’s sons, as manager until he could find another tenant. In October 1902 that tenant arrived in the the person of my maternal grandfather, Henry Giles Wade. 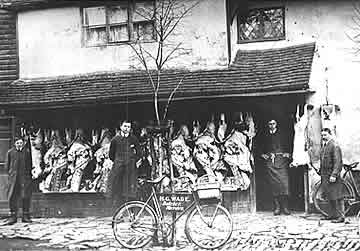 Wades the butchers at Turnpike House

Henry Wade was then 40 years old and had been a farmer at Southfleet, but low prices for hops had forced him to give up. But he had learnt the butchers’ trade as a boy and young man from his own grandfather who had brought him up, so he had this skill to fall back on.

He proved far more successful as a butcher than as a farmer. He would buy the best animals available, even if he could barely afford to, and as a butcher it paid him. He was always seeking to improve his recipe for sausages, and was ready to move with changing times. About 1912 he bought a Ford T van to replace the 2 horses for deliveries, which his sons, Henry (Harry) and Will and eldest daughter, Maggie, learnt to drive. At one time he had a branch shop at Collier Street which did a fair trade during hop picking.

At his own expense, because his landlord refused to, he had mains water laid on to the house. Previously the only water supply had been from a pump that stood on the site of the present day door to the house. One day it pumped up a worm, which caused great consternation.

The only toilet in those days was an outside closet situated behind the bullock pen at the bottom of the yard, which for some reason was known as “aunt”!! There is a story about one of my aunts who went down to the closet one dark night with a lighted candle. Arriving at her destination the candle blew out and she had to relight it with a match, which she tossed into the depths before sitting down. Unfortunately the closet was full of paper and it caught fire!

After the First World War my grandfather bought the property from his difficult landlord and set about improving the place. A bathroom and indoor sanitation were added and the floor was lowered in the drawing room in the east wing of the house as being a big man, my grandfather did not find it a very convenient room to be in.

Henry Wade died in 1931 but the business was carried on by my grandmother, Fanny, as proprietor, and managed by Harry and Maggie. The younger son, William, took a butcher’s shop at Bridge House, Hunton, which is now closed. Fanny Wade died in 1945 and two years later both the property and the business were sold.

The new butcher was Harry Boorman who came from Headcorn. He and his wife, Connie, were newly married and this was their first home together. They stayed about 12 years and during that time certain changes took place. During the 1950s new regulations required the shop door to be moved to the west side of the shop and, as the slaughter house did not come up to the new standards, no more killings could be done on the premises. Also some of the land and the back of the house were sold to Arthur Sutton, thus giving him access to the Maidstone Road, which he had long wanted. In its entirety, the land consisted of a large kitchen garden and an orchard, in all about 2 acres, but after the Wades left it had been rather neglected.

About 1959 the shop changed hands again. Harry Boorman went back to Headcorn. Although he continued to own the property his successor, Tony Castleton, had domestic problems, left his family and went to Australia. His wife and son carried on for a time but in October 1971 the shop closed and the butcher’s business came to an end. The property was then sold and turned into a private house. As it had never had a name apart from “High Street”, its new owner Jack Vernade called it “Turnpike House” because of its position in relation to the Maidstone Road, where the Turnpike Road ran.

Comments on the architecture and earliest history of the house, Mr Robin Judd