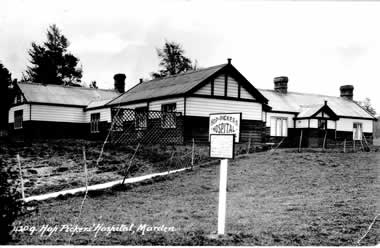 A postcard showing the Hoppers's Hospital

The Hoppers Hospital, opposite the Railway Station, pictured here in about 1930, was built to deal with minor injuries and ailments suffered by the army of hop pickers who came to Marden in September each year to assist with the hop harvest.

The hospital was given to the village, in 1924, by Mrs Spender of Chantry Place in whose grounds it stood.

The following year an extension was added at a cost of £500 of which about £120 was given by brewers throughout the country.

See a newspaper cutting of Aug 1925 for more details.

During the rest of the year the Hospital was used by the community for the care of sick orphans.

Fittingly the Marden Medical Centre, built in 1983, now stands on the spot where the Hop Pickers’ Hospital once stood.