We were contacted by Helena Noifeld, now Maltby, who is a Community Outreach Manager, Media BBC South-East/BBC Radio Kent. She asked if we might be interested in working with her to visit a local school, to prompt a focus on World War I with the hope that the children could elicit information from within their families about memories of World War I on the war and home fronts.

Marden Primary School agreed and Helena, Mike Judd and I visited Year 6, equipped with film, World War I shells, a Princess Mary box, World War I soldier’s helmet, shrapnel, bullets and leggings on Wednesday 6 March 2014. The staff and children were very interested and full of questions.

On 24 April Helena organised a visit by Hercules, a descendant of a World War I war shire horse. We visited again on 17 November to elicit any information and we participated in their writing World War I poems, some of which were superb.

Helena had invited myself and Penny Day to help with the BBC Radio Kent World War I home event in Folkestone on 4 August, part of a BBC local radio national event. We welcomed and directed people as well as helped out at various activities on offer. Hercules was there again, standing asleep most of the time. 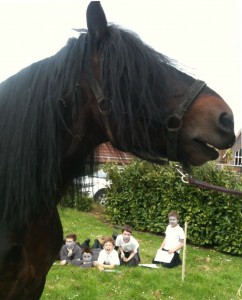 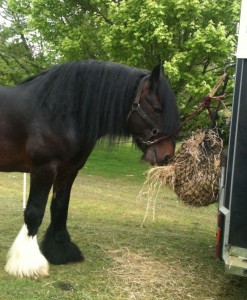 We have permission for the children in the photo above to appear.